A strategy I sometimes use to get students’ attention during a lecture, so they are ready to learn a key concept, is to surprise them with something unexpected and provocative, just before I explain the ‘big picture’ key concept. The goal is to arouse their intuition and allow them to prepare for some important analytical thinking. An “eyebrow-raiser” can help get a point across in such a way that helps it sink in.

I do the same thing when I’m speaking to a group of students about preparing for graduate-school applications. One of my favorites comes up when discussing how letters of recommendation are used in the evaluation of grad-school applicants. I like to point out that these letters are often the most influential part of a successful application. No controversy there. But, then, I tell them that most letters of recommendation are never actually read!

I have to admit to getting a bit of pleasure out of those four or five seconds of stunned silence from a crowd of avidly attentive and fixated people. They stare, with perplexed expressions, waiting for me to explain what I really meant to say. But, instead of clarifying or correcting my comment, I repeat it: “Seriously, most letters, or at least a large proportion of them, are never read by anyone, other than being proofread by the letter writers before they seal them in an envelope.”

I might play a bit more by saying something like, “Oh, the envelopes with the letters in them are all opened — that’s necessary to confirm that the required documents are inside. But, it would take too long to read all the letters, and the people deciding who gets in might not even find it helpful to do so.”

This is usually when the low-level murmur among the audience picks up, and I notice some of the puzzled looks are changing to expressions of annoyance. The time has now arrived to make my point — and everyone is ready and paying full attention.

Exactly what I proceed to talk about may be different on separate occasions, because there are a number of reasons why most letters are never actually read. I will usually go on to explain how the process of selecting applicants actually works, and how not all applications get the same amount of attention, partly because different people may be responsible for evaluating different applications to the same program. Alternatively, I could describe the student evaluation form that the person writing a letter of recommendation is normally required to fill out and submit along with the letter. Understanding how this evaluation form is used in the selection process can go a long way to explaining why many of the letters attached to them are never read.

Here are some other provocative statements I use to garner attention and interest when talking to students about grad-school applications:

“Decisions about who gets in have nothing to do with who deserves it the most.”

“Helping a professor with his or her research is the best way to set up an effective letter of recommendation. This strategy backfires, more often than not.”

“Many students are accepted into a graduate program before they even apply.”

Personalized Career Services Are Available To You

Our Most Viewed Posts

What’s your strategy for Getting In?

Need Help Getting Into Grad School? This is the Book For You! 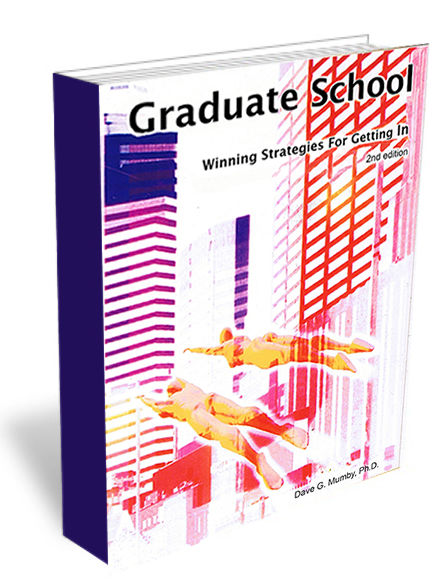 Winning Strategies For Getting In. Order it at Amazon Now